Black tea is also known in China under the name of hong cha (red tea). It is also called red tea in China because of the red edges of the oxidized leaves or the color of the infused liquid. Black tea is just one of the six different types of tea. This variety is a completely fermented (oxidized) type of tea. The black variety has been originally only exported to foreign markets. In the past, Chinese themselves considered the black tea as being of lesser quality. Even nowadays, when someone is talking about tea in China they are usually referring to green tea, while outside China everyone is more familiar with the black tea.

In Great Britain and the United Stated, black teas are currently the most popular type of teas. However, most of people aren’t aware of the wide variety of black teas available to choose from.

Ching Wo — This is a bright red infusion coming from the Fujian Province.
Dayeh — This “broad-leafed” subvariety is native to Yunnan Province.
Dian Hong — This black tea also comes from Yunnan and is considered to be one of the better quality teas, with a richness to its taste.
Hainan — This tea comes from the South China Sea, on the island of Hainan, at the southern extremity of Guangdong Province. It has a strong fragrance and flavor.
Keemun — Keemun black tea is also called Qi Men Red Tea. This variety comes from the Anhui Province, the former county of Keemun. There are various grades to this variety, such as Hao-Ya, Mao Feng and Ji Hong. This black tea contains an essential oil called myrcenal, which gives it a distinctive taste with rich and bold flavor.
Darjeeling Tea — This tea comes from the region with the same name located in India and it is grown at the highest elevations. There are two types of Darjeeling black tea. The First Flush has a golden shade and a crisp, refreshing muscatel flavor. The Second Flush is a much more smooth, mellow and earthy type.
Yunnan Black Tea — This tea is also called “South Cloud” or “Cloud South”. It comes from the mountainous southern province that borders Burma, Laos, Vietnam, and Tibet. This region is thought to be the real “origin” of the Camellia sinensis tea plant. This variety is one of the best, being a smoother, mellow and strong tea, with a lingering aftertaste and a silky texture.
Assam Black Tea — Assam black tea is a variety coming from India. This is a robust and strong full-bodied tea that comes with a malty flavor.
Lapsang Souchong — This unique type of black tea is prepared by using pine or bamboo fires for smoking the black tea leaves. Its flavor is a deeply smoked essence. 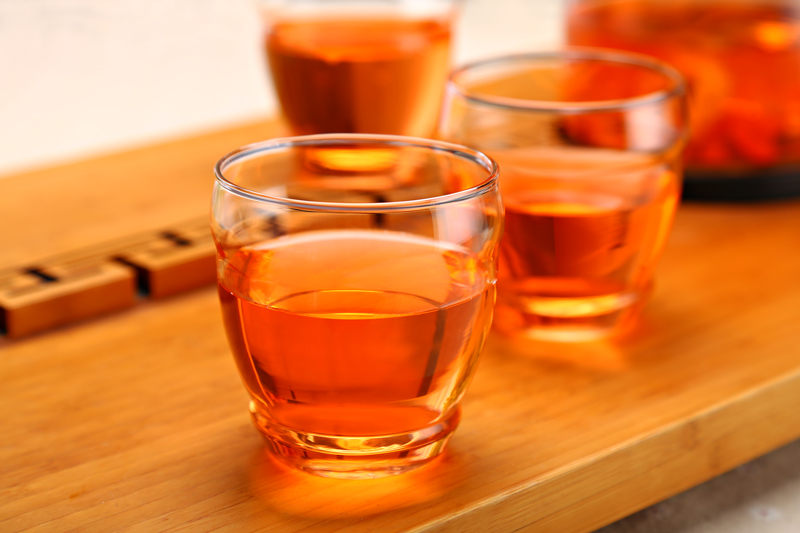 1) Black teas available on the market today come in two main types. They are either a plain black tea with no added flavoring, such as breakfast teas, Assam teas Darjeeling teas, and other unflavored black teas, or flavored black teas such as Chai Teas, Earl Grey and other various flavors.

2) A basic black tea is unflavored. As a general rule, un-blended black teas take the name of the region of provenience. For instance, some of the most popular varieties are Darjeeling, Ceylon, Keemun, Assam and Nilgiri.

3) Black tea comes in different grades. They vary from the worst grades which are called “fannings” or “dust” and are the standard type to be found in generic black tea bags, to the best ones such as a good SFTGFOP1 Darjeeling.

4) Most varieties are grown and processed in some East Asian countries, but India and Sri Lanka are also known as the producers of the finest black teas in the world. When you must choose your black tea you must look for the freshest.

5) As black teas will degrade in flavor, aroma and color over time, it is best to choose the most recently plucked black teas. Their color should be black and bright, not grey or dull. They should also have a pleasant aroma. All varieties of black tea must taste, smell and look smooth and pleasant.